No, there is no evidence that red or infrared light directly contributes to vitamin D production. Vitamin D is produced by our body during and after exposure to UVB (ultraviolet B). There is, however, an important factor that makes Red Light Therapy very interesting for the production of vitamin D in an indirect way.

A 1992 study in Kyoto Japan already showed on the skin of mice that skin pre-treated with infrared had a significant reduction in cell damage after being exposed to ultraviolet B (UVB) radiation (290-320nm). https://pubmed.ncbi.nlm.nih.gov/1610218/

An article written by scientist Daniel Barolet and colleagues in Montreal Canada called Infrared and skin: Friend and foe describes how it was suggested that infrared A from the sun might be just as harmful as UV. However, investigations on this subject used devices that are not representative of the radiation of the sun.

They elaborate on this by stating that the advantages of infrared are many times higher than the assumed disadvantages. Studies indicate that infrared light preconditions the skin, in English 'photo prevention' as also occurs in nature with much more infrared from the sun compared to UV in the morning and evening, so that the skin is better against UV due to the extra infrared. can. 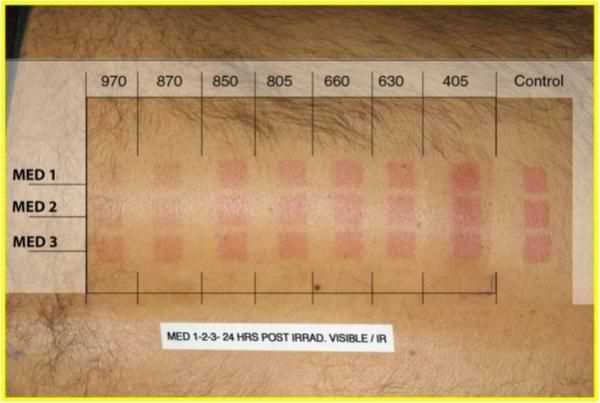 For example, Barolet indicates in a 2008 study that at least 85% of people who have had a number of pretreatments with LED at 660nm showed a significant reduction in erythema. https://pubmed.ncbi.nlm.nih.gov/18306161/

Finally, he concluded the results, a sun protection factor SPF-15-like effect and reduction in post-inflammatory hyperpigmentation was observed in the LED treated subjects.

In a 2012 study in Korea, LED red light therapy was tested for narrowband UVB-induced skin aging. The researchers concluded not only that Red Light Therapy works, but also that a combination of, for example, 630 / 850nm or 660 / 830nm works even better than a single frequency.

How Red Light Therapy can contribute to Vitamin D production?

Now that we know that Red and Infrared Light Therapy can help prevent ultraviolet (UV-B) damage and provide SPF-15 like protection for your skin, the hours when UVB is highest will allow you to take longer to produce vitamin D. the sun without an artificial protective layer on the skin so that the absorption and production of vitamin D is realized.

Of course, even with a possible pre and after treatment with LED Red Light Therapy, common sense remains an important factor in terms of spending the time in direct sunlight. Burning must be prevented and avoided at all times to maintain optimal health. Skin health other applications of light therapy for and on the skin are extensively explained, also here at the bottom of the page all references to the studies can be found.